How Effective is Precinct Walking?

This report was compiled by the campaign's interns and volunteers. If you're interested in becoming an intern for the campaign, click here.

First, a quick summary of the overall results for Kevin. According to data released by Placer County, Kevin received 14,886 of the 86,621 votes cast during the election, giving him an overall percentage of 17.19% of the total vote.

Kevin did significantly better in precincts canvassed by volunteers (i.e., precincts in which volunteers contacted voters by knocking on doors). In fact, a majority of votes Kevin received came from canvassed precincts.

To ensure the significance of the data, we performed a chi-squared goodness of fit test. We assumed that if canvassing and number of votes received were independent, then Kevin would receive 17.19% of the votes in both canvassed and uncanvassed precincts. Using the data below, we calculated a chi-squared value of 755.5 and a p-value of less than 0.00001. The difference is clearly significant.

Comparing precinct by precinct data on number of votes and number of interactions with voters, we can make the following scatterplot. 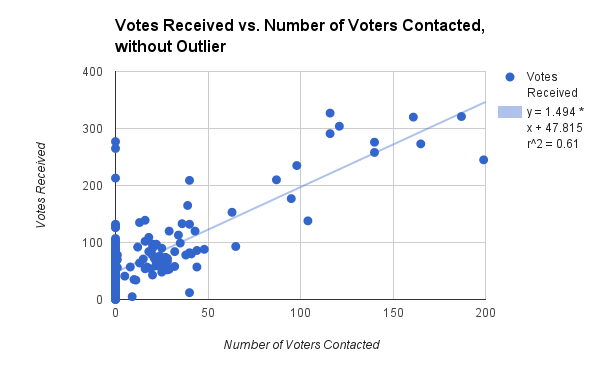 The correlation value is 0.78, which indicates a moderately strong correlation between the two variables. The relationship is obviously affected by many factors. This is especially noticeable in the uncanvassed precincts, where the number of votes ranged from 0 to 277. A certain amount of each precinct’s votes can be attributed to Kevin’s other campaign operations--which vary precinct by precinct--and random chance, as some voters simply pick a random name on the ballot. 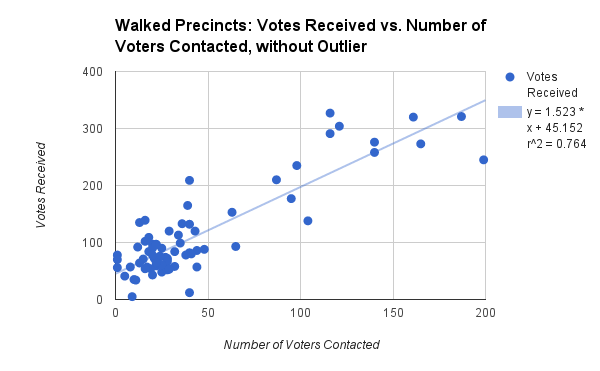 Looking at the linear regression line, each additional voter contacted corresponds to an expected gain of 1.523 voters on average. This is probably a result of the networking that results from a successful voter interaction.

We then examined the effectiveness of Kevin’s canvassing versus our volunteers’ canvassing. The data is summarized in the chart. 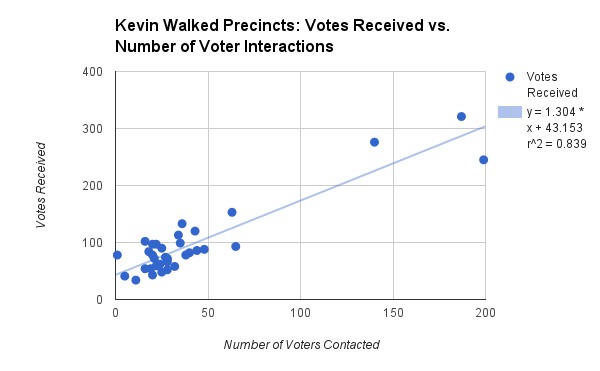 In the precincts canvassed by Kevin, the number of voters he contacted was strongly correlated (r=0.92). 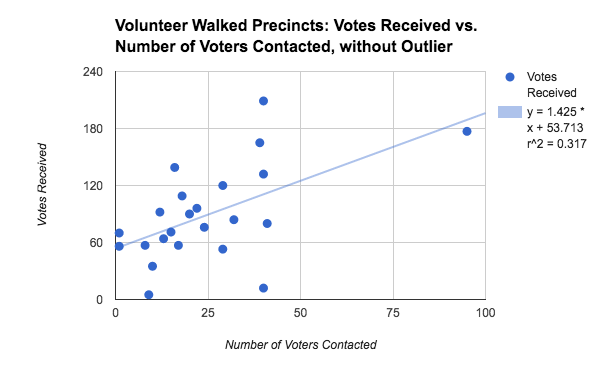 The correlation (r=0.56) is somewhat weaker in volunteer canvassed precincts than in those canvassed by Kevin. The overall efficiency also favors Kevin himself. Kevin received 2.36 times as many votes as voters he interacted with, while the volunteers’ overall votes to interactions ratio was only 3.623. 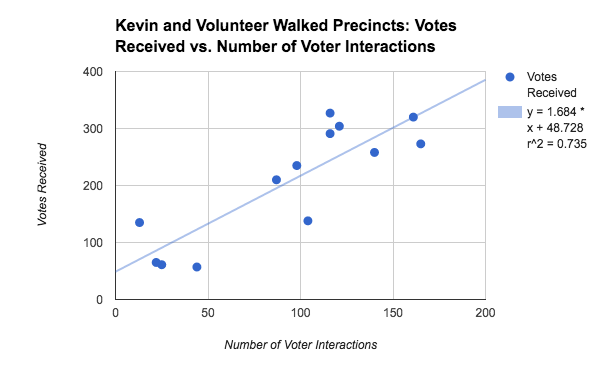 Looking at the precincts canvassed by both, we see another relatively strong correlation of 0.86. The ratio of total votes to total interactions is 2.21, less than Kevin’s ratio. However, the method garnered high voter percentages perhaps because it combines Kevin’s allure as the candidate himself with the efficiency of the volunteers. The trendline for precincts canvassed by both also had the greatest slope. 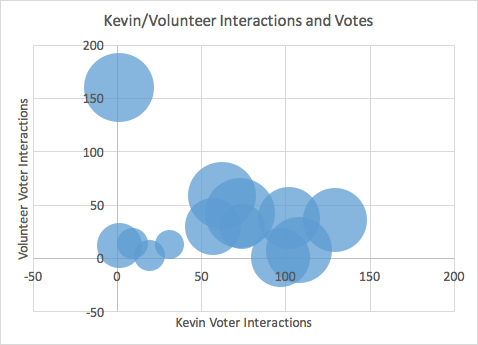 1- What is the correlation (if any) between our canvass operation and Kevin’s precinct-by-precinct vote share?

2- Did it matter whether a precinct was canvassed by volunteers or by Kevin himself?

3- Is the correlation (if any) between our canvass operation and Kevin’s vote share more pronounced if we consider only absentee ballots?

A Chi-square GOF test was conducted to see if there was a significant difference in the distribution of absentee vs. non-absentee votes. 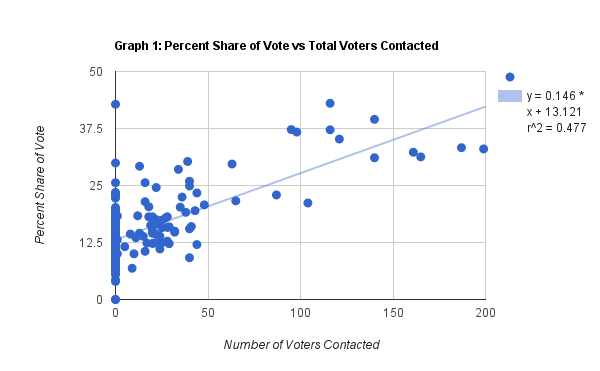 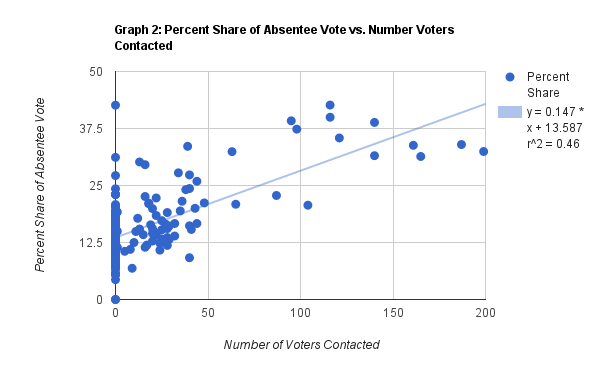