How Many Jobs Have Left the 6th District?

This report was compiled by the campaign's interns.

New research shows that businesses are divesting from California because of its inhospitable regulatory environment. A report by Joseph Vranich, president of Spectrum Location Services, used information in the public domain, including news articles and government reports, to quantify the number of companies that left California for regulatory reasons within the past seven years.

We analyzed the report's data to graph the jobs lost in the 6th Assembly District, an area that includes parts of Placer, Sacramento, and El Dorado counties. We found that between 2007 and 2014, the district lost nearly 2,100 jobs, which the report attributes to overregulation. (See chart below.) 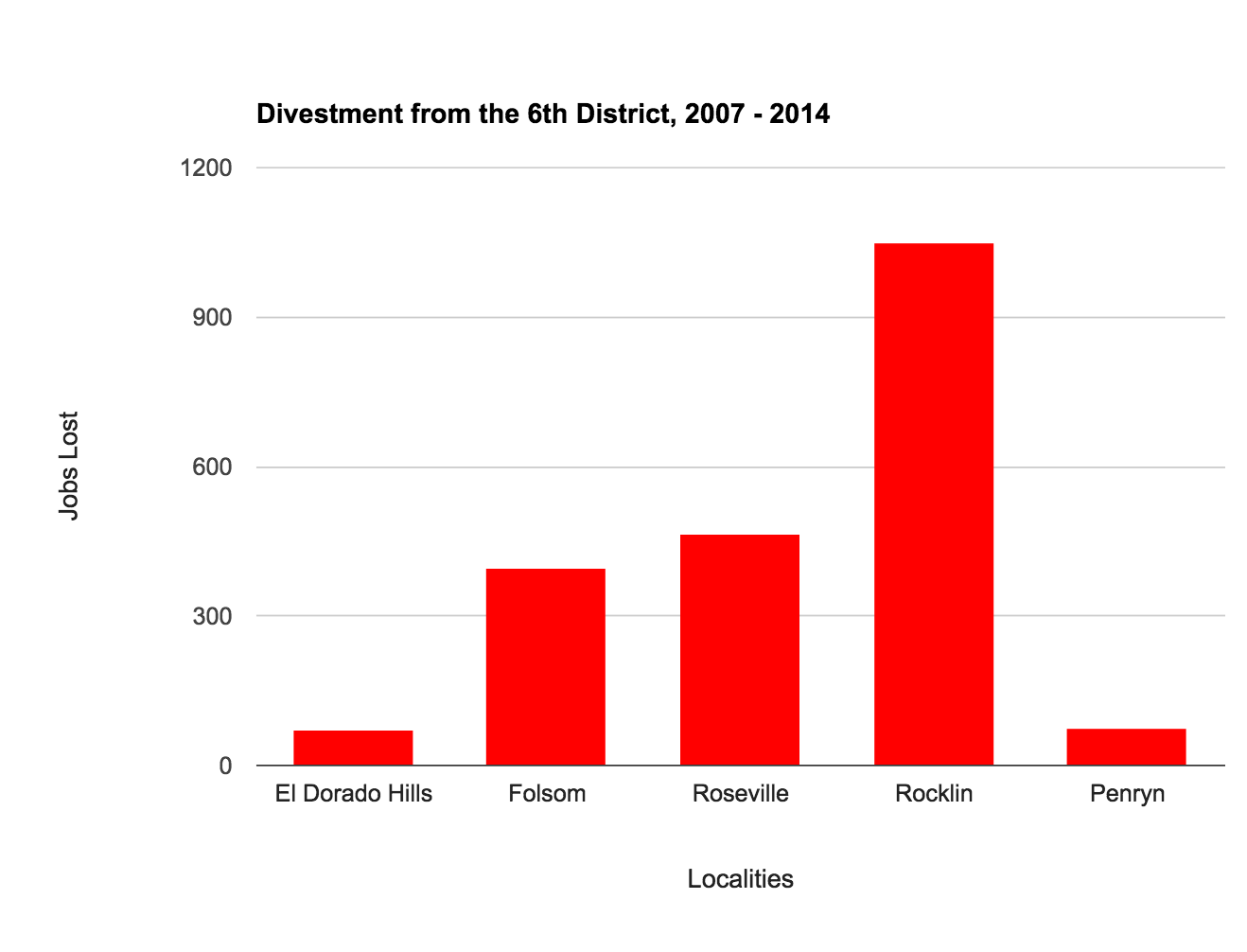 Several companies, including in telecommunications and insurance, were reported to have moved more than 700 jobs out of state. There were 20 small businesses, many of which provided high-income jobs in scientific research and development, that also relocated jobs either to neighboring states or other countries. Job loss in Sacramento, a city which is an important and relevant job market for the district (albeit, one located outside of it), lost 2,679 jobs from divestment.

The above data does not include jobs that moved to localities with regulations similar to those found in California (like New York City). It also does not include companies that moved out of state in order to expand into new markets or gain access to local resources. These are jobs that were reported to have been lost as a result of a caustic regulatory environment that levies unnecessary restrictions and costs on businesses.

Joseph Vranich explains that the data understates the severity of divestment. According to Mr. Vranich, only 20% of instances of divestment receive press coverage. We may be looking at roughly 10,000 jobs lost in our District in the last seven years.

Data from the California Center for Jobs and the Economy puts this number into context. Between 2010 and 2014, the economy of the Sixth District added 27,000 jobs. We can roughly conclude that a more benign regulatory environment would have increased job growth by more than 33%.

The degree by which businesses are taxed and regulated clearly affects the job market in our state. "This is one more argument for reforms that streamline the regulatory environment, lower cost of living, and reduce the tax burden," said Kevin Kiley.