This report was compiled by the campaign's interns.

In order to better understand some of the reasons behind the rising cost of higher education, we surveyed the growth of administration, faculty, and student enrollment at California State Universities (CSUs) over the last few decades. Using 1980 as our starting point, we compared the year-by-year percentage change in the size of these three groups up to 2013. Our data shows that since 1980 the number of administrators has grown by 126.7%, while the number of faculty has only grown by 17.95%; the student body, by 63.66%. In other words, the number of administrators has increased at 7x the rate of growth for faculty and 2x the rate of growth for students, resulting in more administrators and less faculty members per student today than in 1980.

The net change in the ratio between faculty, administration, and students is even more pronounced when comparing 1990 with 2009. This chart shows that while the number of faculty has barely increased since 1990, the number of administrators has grown dramatically. 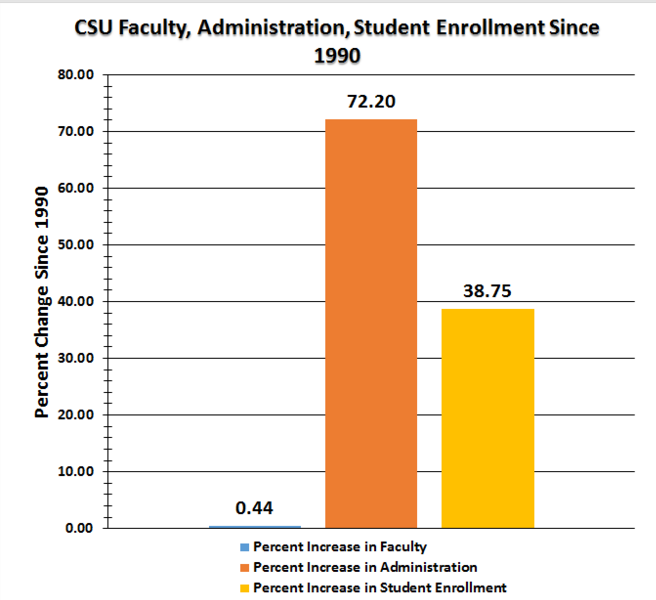 Such a disparity in the growth of administration in comparison to that of the student body and faculty has put further strain on both the taxpayers and students. Indeed, over the last ten years, notwithstanding the high costs of an expanding bureaucracy, the salary of CSU managers and supervisors increased by 24%. Meanwhile, the cost of tuition at CSUs has more than doubled.